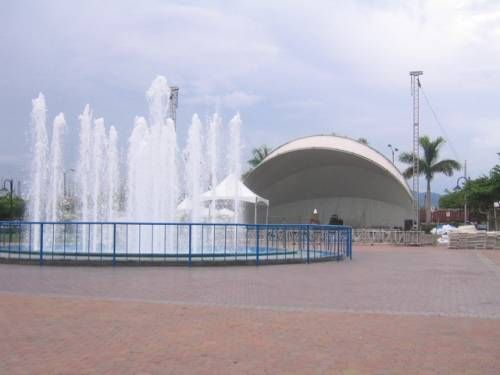 On Friday I left work late, as has become a new habit of mine. Only to notice that there was heavy traffic on the road at 9:30 p.m. At that time a night heavy traffic meant only one thing - something had gone wrong in the delicate balance of our urban lifestyle in Kingston in Jamaica. Plain clothed police on foot chasing cars in traffic. It was a melting pot - something was going wrong somewhere, I felt I was missing something. Malaise. My cellphone battery was dead. The only thing to do now is find a way home and fast.

You only have to ask another person because no matter where you are in Jamaica the chaos is organized. I hadn't watched Television Jamaica in a good while unbeknownst to me the Rising Stars show had grown imensly popular. And the finally which was to be held on Friday, Sept 23, 2005. Emancipation park reached capacity and people were climbing over the fences to get in, people fainted, the road around the park were jammed and chairs were smashed. All this was happening while I was hacking away at ASP.NET code at my office in Half-Way-Tree.

So the next day decided to go take a few more shots of the statue in Emancipation park for those of you who keep searching the internet for them ever so constantly. Maybe I can reach there early enough to get a good picture of the a broken chair before the cleaning crew arrives to sequester. I am usually lackadaisical on a saturday morning but I can hope for the best. Send the wreaking crew after me. I got there too late so I took a picture of the fountain instead, the stage tent is in the background.