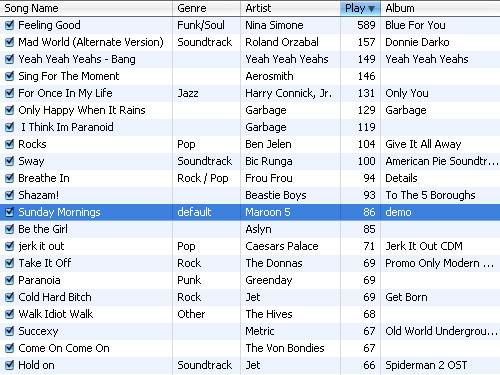 I've been passed the baton thrown the stick by Arie, so I guess I will have to provide some metadata, before trying to hit an unsuspecting passer-by. So, this means that I am next to tell you all what music I listen to. The screen shot of My Top Rated and is a not of the home list (1 of 3), the screenshot does not indicate anything about by varied musical tastes.

The last CD I bought was

Nelly Furtado CD with "Turn off the light" on it so diappointed never bought another cd.

Five songs I listen to a lot, or that mean a lot to me

I listen to new songs a lot, repeatedly until newer ones replace then but I play the old ones on occasion. I favour the Life For Rent album by Dido Armstrong.

Five people to whom I'm passing the baton

well then that's it.