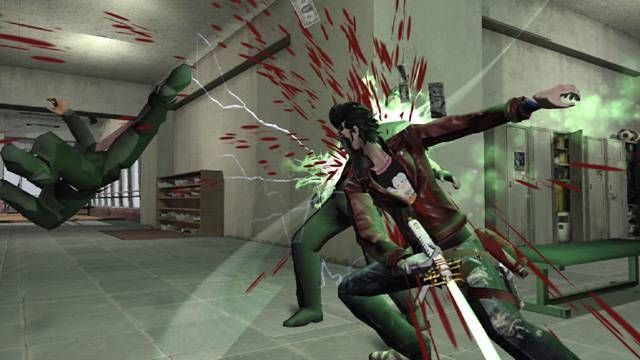 NMH2 is what I refer to as "a gamer's game". It ridiculously hard in some places, unforgiving in others. Highly repetitive while at the same time being new and refreshing in its simplicity. You get better as you play it - which is surely lacking from the games being released nowadays People will look at the television and wonder what kind of madness you are playing. All they will see is blood, flashing lights and exploding bodies. I totally love it.

It is probably the best "new IP" in years. Call of Duty 2 is the same game in different locations with more cutscenes. Mario is Mario you've played it a thousand times but its the same-o-same-o. NMH2 is not mario and it will never be. You chop heads off and you turn into a tiger and bite people while calling them losers and eating pizza for health. NHM2 is a NEW game in every sense of the word. The music is new, the characters are new, the graphics are new, the clothes are new, the story is new. Million dollars worth of games are released everyday and nobody buys them because most of them simple other ways to waste time.

Its a M rated game. You cannot buy it for you 5 year old because they may grow up to be a serial killer or an assassin or maybe not but we never know with these kids nowadays. And there is no feature to turn off the blood. There will be no feature to turn Mario into a "M rated" game which is why I wonder why people keep asking for content filters on games. Vegetarians don't eat meat, asking meat producers to sell vegetables that look like meat is not very productive. The quality of the game is in its pure M-rate-d-ness, and edginess, not in its mass G-rated dumbed down appeal. Its almost like asking scientist to make space rockets easier for people to fly. You are an idiot, embrace your destiny. There are things that you cannot do.

Video Games as a Sub-Art

People compare NMH2 to Kill Bill, its a movie with lots of blood, turned in a video game. The Avatar movie is a Billion times better than all of the Avatar games because games nowadays have no soul - they convey no emotion.

Video games as a industry are always treated as a sub-art. You would never hear a person say that I wish that violent Friday the 13th movie had a E rated version. the very concept is ludacris. OR better yet a version of shakespeare in which the lovers don't drink posion at the end.

A game like NMH2 is like heavy metal music. It only makes sense in its context. Of course you could take out the voilent content and put Barbie as the lead guitarist. But I am sure there is are Barbie sword fighting games already on the selves - so why do we need to make 2?

Its the game that your parents said was going to rotten your brain. Its like eating too much sugar. You go into the in game clothes store and you buy a t-shirt that he wears throughout ALL THE CUT-SCENES. I wonder why more games don't let you buy clothes. Its just a texture swap. Its adds a certain substance to the cut-scenes.

My only complaint is that its not long enough. 10 hours of fun, 3 hours of annoying boss battles. Games like this should go on forever with auto-generated dungeons and death matches.

All gamers should buy it. However Moms and Pops should rent it because it can get really hard in some places and it can take along time to memorize boss patterns enough to kill them. Good reflexes and thumbs are required.