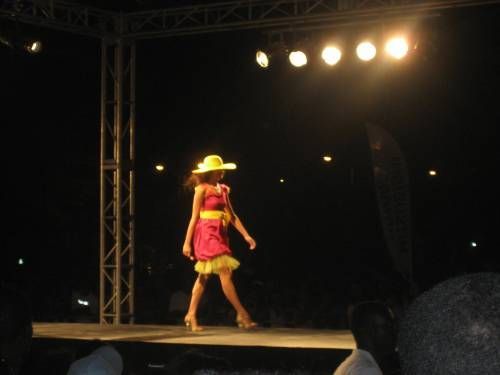 If your gonna drag me out of my house on a sunday, it better not be to see models, capoeira and folk singers. No I don't have the touch. Why must there always be a VIP area? And when you say "complimentary, ultra all-inclusive" what exactly do you mean? It better not be more paint and shrimps.

On Saturday the last thing that I expected to happen, "happened" in the blink of an eye. She started to smoke. I have nothing against women that smoke. Because I really don't know any women that smoke. It came as a shock to me as if I was hit by lighting or made contact my tongue and a 9volt battery for the first time. Or in a case in which I'm disappointed in people who go to the beach on Labour Day. "Dem no have nutten bout dem". Slackers as the Odd one would say. The Nephew realised it first, so obviously it was his fault. It is a rule we have, like many rules, designed to cast blame without argument or logic. She started to smoke. We stopped her immediately fearing the worst which we knew because its not everyday just starts smoking "out of the blue" or "in the dark" or whatever.

I felt my heart sink as if I had lost something I cared deeply about. I searched for answers to the obvious questions; did I not call her enough? pay her enough attention? give her everything she could ever need? stroke her smooth nobs until she started to purr like a kitten? It was too late she was half the woman she was now. Spilt milk.

In any event I was not about to get rid of her like old cloths. But instead I will bring her back to life again. By any means necessary. Its never too late. We had shared too much together. A love like this is too hard to find. Call me a hopeless romantic - I don't care but its the little things that give us the most joy. keep us clean. The gleefulness of it all. So they took her away, off to rehad. A empty, dirty space is all thats left where she used to stand. I cleaned there once a lone time ago and marvelled at her bueatiful smile. I watched as they took her away for the first time since we've been together. "Monday" they said, "We'll see what we can do". I waved, she didn't look back, I waved, she gave me the finger. I cried inside. An Ode to a Speed Queen.

mad bull commented: I saw a woman smoke a cigarette with her vagina once... seriously! ... read 11 more

So I was readin Leon's thoughts on...Sara Lawrence's dethroning. I don't tink many of di ather Miss Jamaicans woulda need to have abortion or even need to did taught bout it. My research did has proven it pretty hard to get pumpum from hanyone ah di contestants dem. Dem stuck up laka hackee. On di adda hand, even harder yet, in optimal conditions, to get it bareback. But still, most likely my research datta probably too old to be of any good use nowadays, hin dis hear society dat we being living inna. In one ear and come straight out de odda.

As for the abortion ting, she coulda done it without not a sole knowing. Even by taking a morning hafter pill or someting like dat. Bad and noso bad, worst things a have been hideing from the Jamaican public. Anno everybabbi daff like some people. Long story short, you caaan have belly during yu reign. And di way she mawga she caan hide it edda. It just naaw go look right. Better she tek wey harself. What kinda message she woulda being sending to the young, mawga, up and coming Miss Jamaicans dem? Anno like sey shee did married - it woulda bad and no so bad. But be reasonable, 2 bull caan rule inna one pen. Gal have responsibilities.

She did do right ting AFTER she did the wrong ting and thats all dat mattas. And by "wrong ting" I no mean sey she shouldnata share the prizes wid somebody but more "wrong ting" by not using adequate anti-breeding technology. Coulda happen to henyone - Well no really still, firstly you would haffi ugly enough fi win di competion, den you woulda haffi have di breed-ability fi breed an anno everybaddi breedable haaat tall. Prevention betta dan cure. Go tru my girl no watch no face. Tek wey youself. Pickney a blessing pon us all still. yousimi. more time. 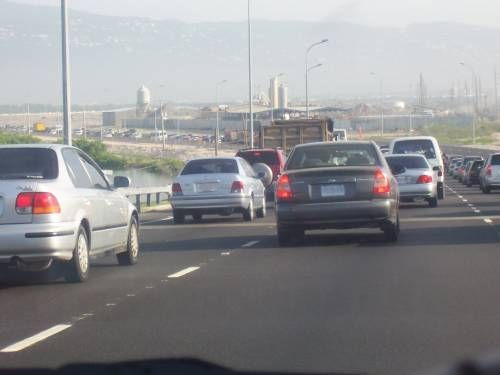 Traffic one morning on the causeway bridge - the new Portmore Highway. The traffic started little after paying your money at the toll booth.

taylor commented: and i call this one... traffic is a bitch.. i gotta do this everymorning and it sucks ass... ... read 10 more