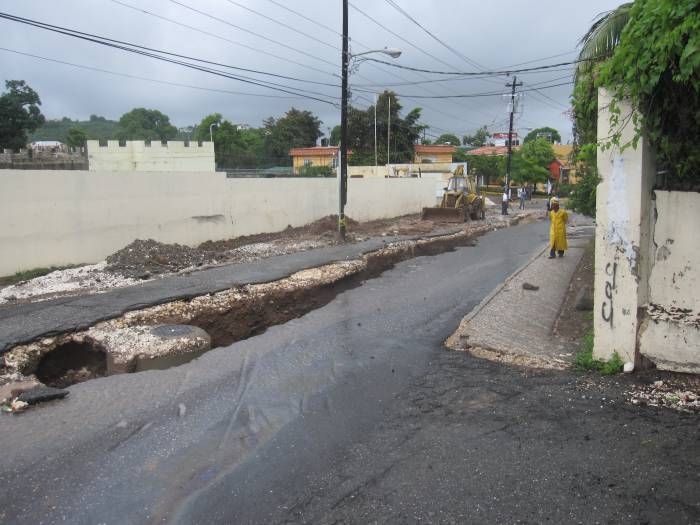 Now that the rains have subsided we can go back to arguing about politics and the life of crime and partying. Alas, not before we get to use this fuzzy new word called "BILLION". It seems like the politicians were itching for a reason to drop the B-bomb since - I don't know - the sell-my-jetta recession but there never quite was a good, believable reason to use it. Now they dropping B-Bombs left, right and center. Seems like regular millions can't do anything anymore. Give me a 100 million dollars and you won't hear from me again - you can count on that. Straight, Jeans....

If I can digress for a moment, I'd like to briefly mention that every time I hear the phrase Manatt, Phelps & Phillips, I start to sing it to the rhythm of Vybz Kartel's song: Straight-Jeans & Fitted. Who can do a quick remix?

Its like a couple months ago after the whole Dudus thing when they said they needed a BILLION dollars to fix the Coronation Market. A BILLION dollars? really? You need a billion dollars to fix a market where poor people have to toil day in and day out to sell their goods in order to "barely" send their kids to school? A BILLION DOLLARS? You would think that the market was hit by a missile or maybe it was rotting away over the years to the point of disrepair - I don't know. I stopped following that story when I heard a cell company jump up and say they donating money towards the project. It done yet? I think bright red is a nice color for a market.

Which brings us back to the title of this post. Now clearly Jamaica is in a much better position to deal with hurricanes than it was a couple years ago. Problem is hurricanes, usually come and go pretty quickly. Barring the people that live in dangerous locations (who either don't know better or can't do better) the country is usually able to bounce back.

The situation with Nicole now is a whole other different story (aka kettle of fish). First of all she kinda snook up on us all of a sudden ( like an angry ex with a knife) and the supermarkets never get to make any money off the millions of people rushing in to buy last minute supplies. Secondly she kinda stayed too, like that neighbour that came over you house to borrow sugar but stayed for a game of wii sports and snacks. Thirdly, everybody and them mother was still driving around in the rain helping the mash up the poor roads that neva build good in the first place. Mek unnu no tan a unnu yard when rain a fall?

If you look at the situation closely most of the road infrastructure simply was not designed to handle long periods of rain fall. Its not all Nicole's fault, in fact it takes 2 to tango, if you look at the Highway 2000, not a single puddle of water settle anywhere on that big ass expensive road. As for the rest of the roads? every pot hole turn into a crater or trench depending on various factors such as elevation, asphalt thickness, constituency, traffic and a number of other factors. I've seen potholes appear in the most unusual places like US citizens in the Jamaican government. I can't even spot them any more I just look for a trail of look gravel and I know that its there, somewhere, waiting, hiding below the water, ready to mashup my new Clarks.

Several people have died, others are homeless, river-less and their cliff-side home has fallen into the gully. The minister of Agriculture says there is nothing to worry about - all our chickens will arrive in time for Sunday dinner. Many people have more water than they can drink, so much so that them flood out of home and land. I guess the drought prayers from a couple months ago are now being answered. Where are we going to find all them billions? I don't know, all I'm saying is Nicole is not all at fault, some of these roads where bad from long time, the rain water just show it up. The Bog Walk Gorge flood every time it rain - why are people still surprised? There is this road in front of Portmore Community College that falls to pieces and develops pot holes EVERY TIME IT RAINS! I'm not defending a tropical depression with a very common name - I'm just saying. We are living in interesting times, excuses abound and new car season is around the corner - it sucks in case you neva KNO. That Touch not going to but itself pay your taxes! Walk good.