So far this year I've been playing around with primary-colour patterns for the website masthead and footer. I am never sure what I am gonna do, I just wing it but I have fallen in to a routine now. You can see a list of all the ones (56k warning) I have created over the years. I picked up this habit from dooce some 10+ years ago.

Apparently coding multi file uploads is not without its fair share of problems. Found a bug in the on iPads which caused me to lose madbull's post. Fixed that in the dead of the night because I could not sleep. I had to check if the file name is the same and added a number to it make each file unique. Not too much work. Unfortunately MB's pictures could not be recovered.

Here is a snippet of php;

Also I spent a bit of time working on the image grid layouts for smartphones, huge screens and regular monitors. Big monitors still need some work. Everything really does look prettier on an iPad.
Pro tip; If you click on a thumbnail it will pop to full size. All pictures are now 900x900 unless they old.
For backward compatibility sake the CSS for the image galleries is stored in a separate file so that I would not have to update the 30+ old legacy style sheet files that I had previously created. Of course it all works and degrades well in IE 6 and Netscape. CSS is truly a mini language that requires thought and practice or bootstrap. 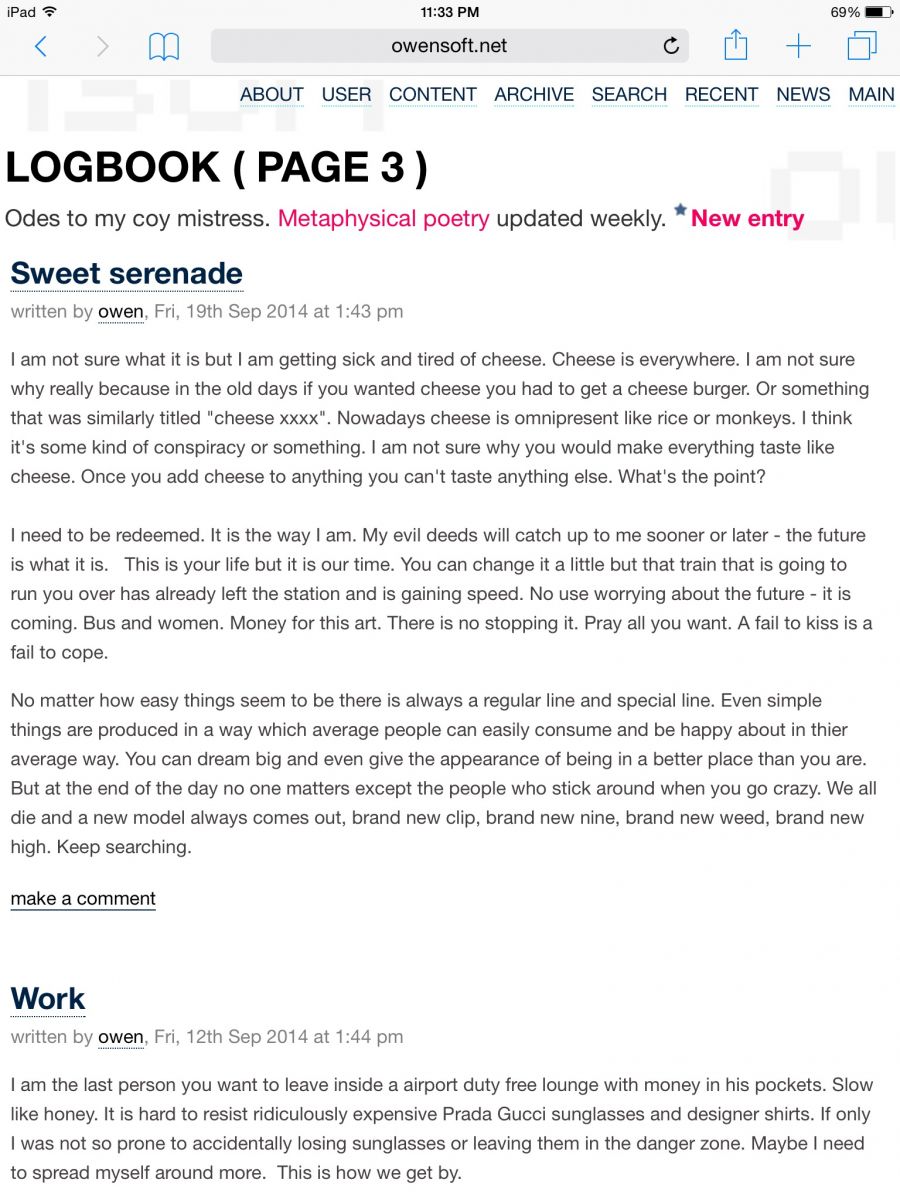 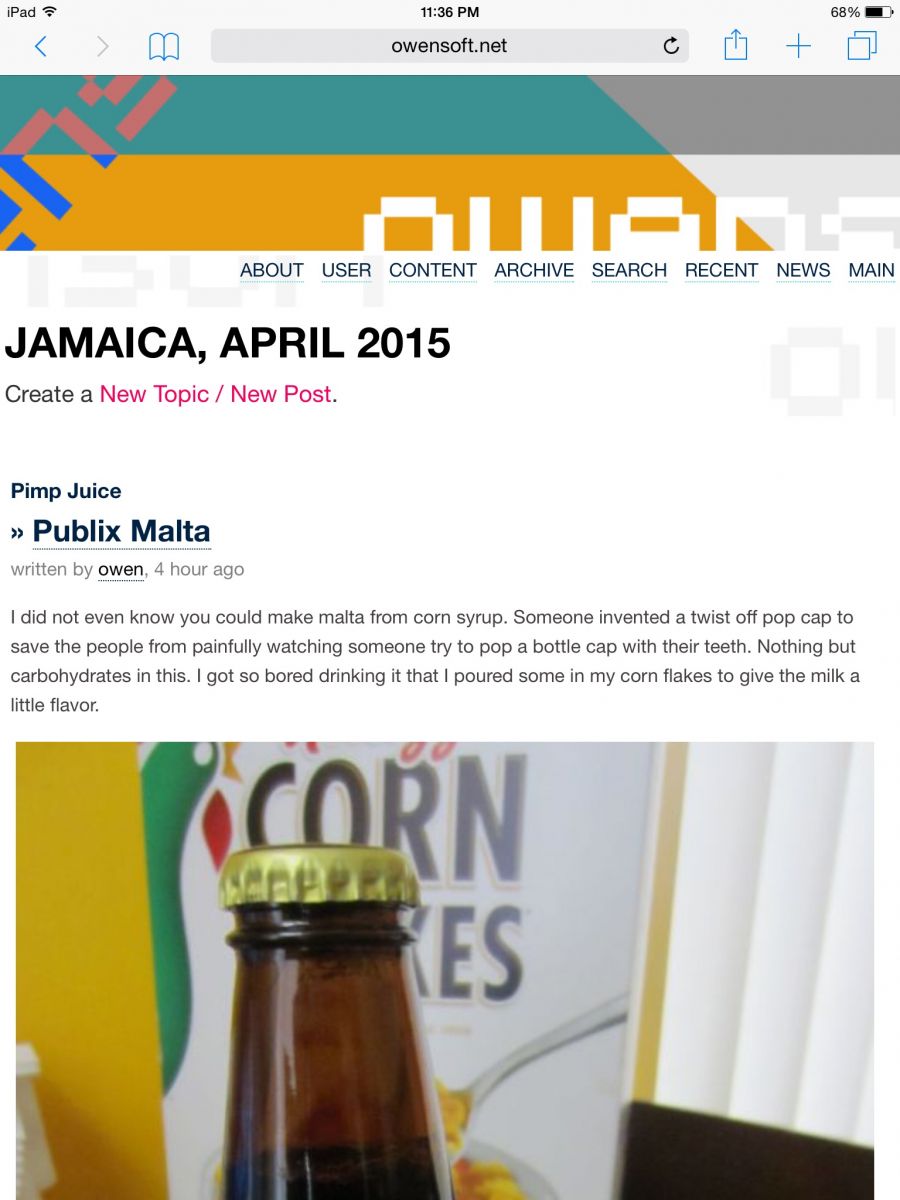 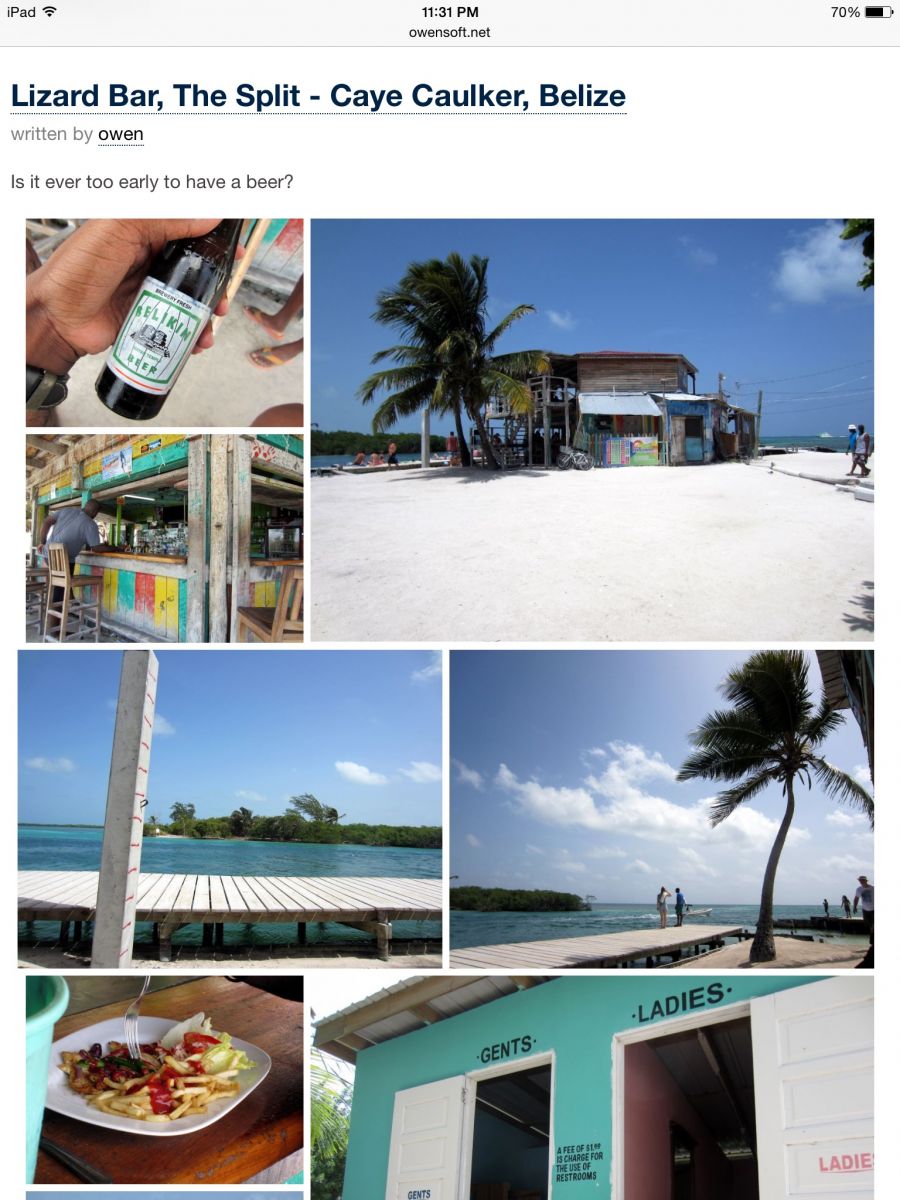 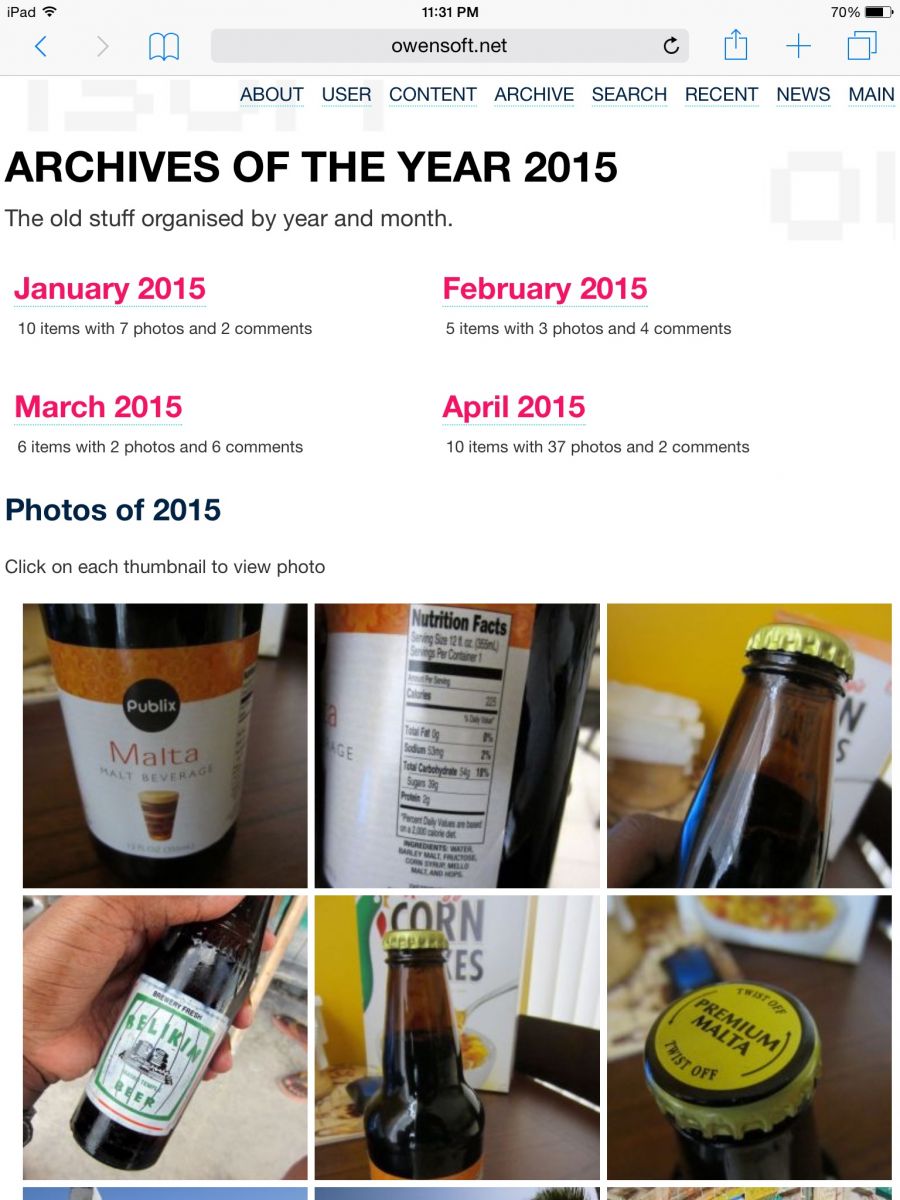 â€ŽI am still hacking at code. Â I finished the admin screens thankfully, so now posts can be submitted, edited, approved and edited again if needs be. Â  Also other registered users will be able to access the admin screens.

Now I am editing the layout templates, all 50 of themâ€Ž. Over the period of time that this site has been up I have improved the template engine a little in other projects but did not port them back which makes this a painstaking process of find and replace. The templates used to contain print() statements but that messed with the control flow so later I changed to having the template parts "return" their data instead of pushing it to the output buffer. Â  Â So I am replacing strings, going through file by file, breaking and updating code as I go along. In some places I wish I had just used a common/shared template but alas I donot want to be implementing new features while I am refactoring lots of little files.

I should probably switch the entire codebase to wordpress or laravel but I would end up messing with dynamic routes which I already have in a bullshit free sitemap table from 12 years ago. Trying to hack them in to OOP space would certainly drive me up the wall and my productivity down the toilet. Even back then I was of the view that a web "page" is a child Â â€Žof a "website", why would I abstract the page into something else? A page has server side code, and a html template - 2 files.
Â The entire website has roughly 50 independent pages. The only thing they share are the common functions, database layer, template engine, and the current user. Â On the flip side in other systems a page is a subset of an entire system of controllers and parts and plugins and crap. So any page you touch is like reaching into a bag of scorpions.
â€Ž
Anyway I don't want to rant on and on about technical details and software architecture. I will probably write an article about it later. Sooner or later I had to get down into the old code. Â  â€Ž

JaysonX commented: YOLO... apparently didn't work. "You need to say more than 2 cents. I suggest you employ the resources of a dictionary." So lets try a lengthy dialogue of useless type and end on another term I'm still trying hard to forget, namely #onfleek. ... read 1 more 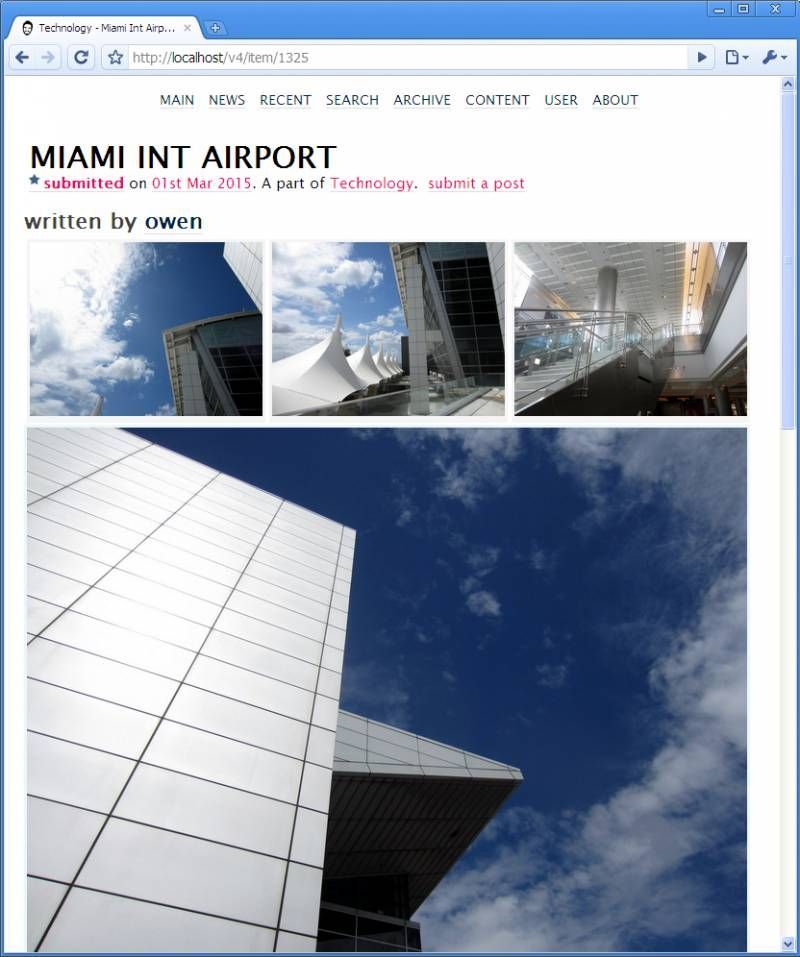 I have started doing the boring stuff of reprogramming parts of the website in order to get the new features in place. Some parts are easily shifted around while others have to be re-written, sometimes as much as 3 times. Prepare for technical blabbering

The form that allows the user to submit images to the website is really one of 3 copies, each although similar in interface is slightly different in the way it stores the form data. All this means is that any program code I write has to be translated 3 times and checked 3 times.
1. New post form: New posts and images uploaded on the front end and stay in a temporary session until they are fully submitted to the post_sub table.
2. Admin review form: all submitted items are reviewed in the admin area. These items are stored is a separate "post submitted" table until they are approved and transfer to the "live" table.
3. Website post form; approved items/posts can be edited aand updated now (which I never needed to do in the past) in the live tables.

All these 3 forms allow for multiple jpeg images to be uploaded/deleted and the item text/body to be edited in their respective states.â€Ž Images can even have captions now.

When I first added photography to the website in 2004 you could only add one 500x375 picture. Back then we were limited by slow internet and small display monitors. Eventually I upped the size to 800x600 as speeds got faster, unfortunately I did not keep the original file uploaded back in 2004, so now all the old photos are stuck at thier low resolutions. Flash forward to today 2015 I am allowing multiple photos to be uploaded per post which will require me tinkering around with a lot of old code and CSS. Now instead of one big image, I will have fancy groups of images like on tumblr (pictured above). The last hurdle to cross now is how to determine when to generate the thumbnails to use instead of the full copies.

As with the post form above, the comment forms also will have to be rewritten using my form controller class which was not available in 2005. I'll be reducing the amount of brain cells you need to post a comment. Hopefully the spam has reduced now compared to the high amount of comment spam that was around back in 2005.

That's pretty much all I am going to change for now hopefully the addition of multiple photos will enhance the content on post by post basis. Its going to take a little while for me to complete it all but I am steadily working through it.

I am slowly adding a new feature to allow more-than-one photo to be added to a post. I will also allow the photos to be laid out in different grid patterns. This change is gonna take a bit of time to get working since wordpress sucks and I have to redo all the admin screens in order to accommodate the more complicated set up.

I said I would never implement a like button and I have yet to see a good reason for it other than to appeal to social media. But I will work on getting some sort of like/love button on here.

I think I ironed out most of the problems with the tons of music videos that get posted to youtube on a daily basis. I also added a social media category for those sites who insist on spamming the internet every single day with lists. I am taking them off the main page and implement some kind of limiting factor to control how often they show up.

Thats it for now.