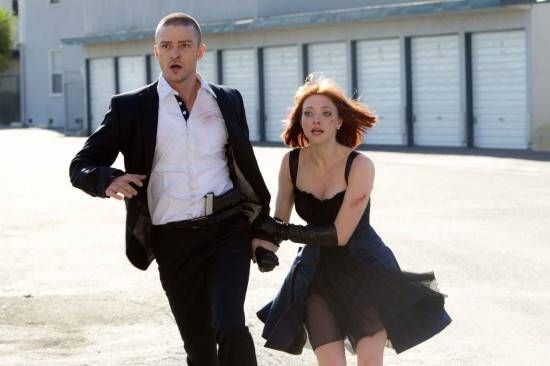 In the not-too-distant future the aging gene has been switched off. To avoid overpopulation, time has become the currency and the way people pay for luxuries and necessities. The rich can live forever, while the rest try to negotiate for their immortality. A poor young man who comes into a fortune of time, though too late to help his mother from dying. He ends up on the run from a corrupt police force known as 'time keepers'.

Lets start out by saying that its a good movie. Above average. If you look past the constant "time puns" and the fact that the lead actress has very sharp knees. They is also lots of running in the movie - they run everywhere like zebras, which in itself is not bad but the lead actress is running and jumping off roofs in high heals (this lady just can't get some dam flats?). At one point her sharp knees got so much screen time that I had to cover my eyes in share pain and look away.

I give the movie a 7 out of 10. Not fully fleshed out, no major surprises but still worth a watch at the theatre, sharp knees, lots of running, pointless desires, happy ending.