On August 6 2004 my little country turned 42. That is it's been independent of britain (or wherever) for like 42 years. Whether independence is a good thing or not matters little - it gives people something to celebrate plus no body really hates us - that in itself is something to celebrate. It will take another hundred or so years before we can start freeing people in far eastern countries from ruthless, weird mad dictators. I trust all the festivities went well and everybody made it through the day, alive to die another day.
And I'm not going to get all patriotic on you and start saying that my milkshake is better that yours. I'm not very patriotic, though by saying this it might affect my chances of later becoming president, I'm going to say it anyway - I will just that I was young foolish and under the influence of evil dancehall music. I might as well have been born in a hut in greenland for all I care. I am not saying this a bad place to be or that it is perfect but it does rain. And when it rains - it pours. I am not using rain as so form of figurative symbol or anything. (I know what your thinking, stop it now)
Now as we celebrate over independence, aging one year closer to nuclear technology, Subways, legalised prostitution and a stable economy. Let us reflect on the past and hope the best for the future. And visit jamaica we need your money. I should visit japan, some day (as well). Not on a tour or anything, just to hang around for a bit - outside of my skin get lost in translation for a bit.

michael halvorsen commented: happy 42nd birthday jamaica. a break from england is worth celebrating. we do it every july 4th. seems a lot of countries celebrate breaking away from the little island that used to be powerful, now they just piggy back on everything we say. funny how things turn out. i'm going to visit jamaica. don't know when, but its been a place i've wanted to visit for sometime now. not as a stop on a bullshit cruise either, actually visit jamaica. same goes for japan, but when i go to japan, i'm going to save my money and buy a bunch of stuff cheap. cool electronic stuff. on another note, 'lost in translation' was a good movie. why, i don't know, but it was good. hard to explain. ... read 6 more 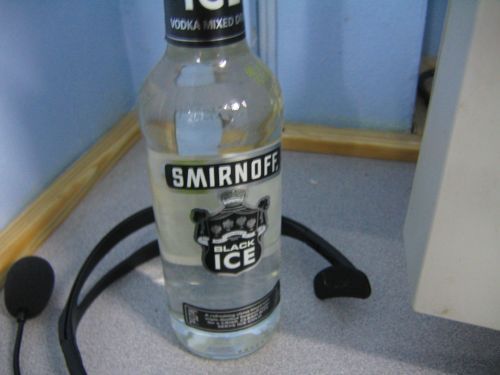 Now I'm not one for the whole night club scene, I like to sleep at night. Anything after 12 o'clock at night any night is too late, way too late. I need my sleep or else I can't wake up the next day. After 12 all my bodily systems shut down, my eyes close, and I begin to see Britney Spears and Alicia Keys throwing sheep over a wooden fence. I'm not leaving my house at that time at - unless I'm going to sleep where ever I'm going.
It doesn't matter which night it is either, I could careless. I'm not much of a weekend person, most times I cannot even tell which day of the week. Because it matters little - mostly on monday. I already have trouble getting up in the mornings and so added late night excursions to nightclubs, involving alcoholic beverages, plane signaling and the rain dance isn't going to help my delicate situation.
Occasionally there will be one or two parties at "the house" put on by "the nephew". Parties which are simple unavoidable, plus I have to keep watch in case the devil wants to play. Of course I don't know anybody and my eyes are almost closing from sleep deprivation but I must stay sane and awake at least. Don't drink at drive. I vote sleep for president.
Call me up at 8 or 9 pm, I am not a night person at all. I'm also thinking of adding a photo project called "pimp juice".

michael halvorsen commented: i used to be more of a weekend person back in junior high, but as the years went on and i had more access (a car and age), i've gone out less and less. the weekends are great because i can sleep in, but i normally end up getting too much sleep and feeling like even more shit. as far as being a night person goes, i am defiantley one. i find myself staying up past 2am just about everyday, whether i am actually doing something or not. i can lay in bed for hours staring at the blank black ceiling. i have to be ready for bed before i can sleep. hard to explain. ... read 28 more

Only happy when it rains

When you live in kingston it's hot, very hot, like JLO or that Nina Sky song. And because of this it doesn't rain that much as in the rural areas, especially with all the concrete, toxic waste and pollution. It hasn't rained in a while but when it does rain it pours for like week. When it rains there's also crazy traffic congestion because people like to drive around in the rain, the rain is good.
Jamaica hasn't had a good hurricane in years, not that I like 120 mile an hour winds and widespread destruction but a hurricane every now and then would make me feel a whole lot better. Probably reduce the crime level, you never know it might help. Shit happens. People can't hang around on street corners when it's raining, your clothes get wet. There have been a few thunder storms, floods in various caribbean countries - mostly in low lying areas affecting only the people who live dangerously close to rivers and fire stations. But a hurriance now is a different bag a chips all together. Hurricanes bring strong winds, lightning, constant rain with the occasional landslide to everybody. Schools close, emergency workers get paid, it could not be a better situation. So people hate the rain I love it. They often travel across the caribbean like loss children in a supermarket.
Rain is a definate advantage of living in the tropics, because it's almost like snow without the extra cold, padding, ice and old people. When we can't go to the beach, the water comes to us and on the rare occasion some hail maybe - but it never stays around too long (because that would be a bad thing). Rain is a sign that the mother nature is running the way it should, unless of course it is acid rain, then you'll know.

roseability commented: me too, i love rain. ... read 7 more

Sometimes you surf the internet and you see an ad or reef or something like that. You often realise without a doubt you must click on it. They just call you in - Click me! Click me! more like porn, a mermaid or those annoying flashing ads that tell you that you'll get free stuff but you know that you'll never get anything or have you?. Especially when you cruising around a website for no reason, waiting for a wave, exactly before your about to fall a sleep (or drown) and a popup window comes up because you are using internet explorer but your glad that this popup window choose to appear at that very exact moment in time.
Often times I have a specific reason to be on the internet. Sometimes I read other peoples weblogs so that I can see what they chatting about today, steal their ideas, wave statistics or news. The news on the web has gotten pretty good even for a small island like jamaica, i.e. if you know where to find it. Well I look at it as of more like the beginning of an exploration. What the sky looks like. what the stars look like, do they still twinkle or are they a steady light when you get outside the atmosphere. The science and space newsletter arrives from cnn every week and I usually read a few of the stories though cnn is biased as hell. But I've always been interested in space and vastness of it. It's kinda like the internet before google. Back in the day when email was the only way to get cool and useless links to website. I miss those days, now all you have to do in type it in and it appears like magic, all this information is getting me nauseous. 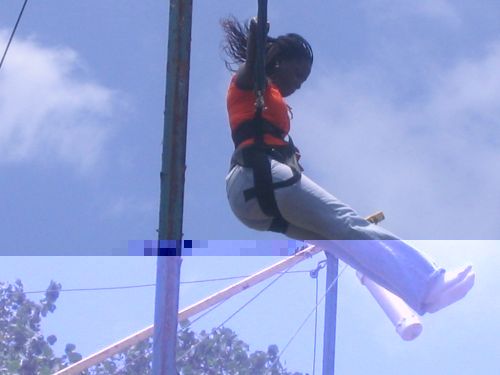 Every day is christmas and every night is new years eve (Sade)
It's been a really drawn out week. I still have a lot of work to do - work which should have been done on sunday except I got draged off to the Portland Jerk Festival. The annual staging of the hot and spicy. Jerk which is a term used for an island style of barbecue that includes marinating the meat in a green pesto-like mixture of herbs, spices, and very hot peppers.        I heard talk "Jerk Ice Cream" too but I didn't stay around long enough or cared to find out.
So now I'm back and waferbaby has added a niffy new feature to his site but I've still got other things to do on this one. Especially about people asking questions about a certain person. All silly little 15 year old girls they are but I'm working on a solution.

owen commented: it's one of those bungee things that they set up at festivals and such other kids stuff that fun dealers tend to set up. 2 bungee cords allowed people to go mainly up and down, as far as I remember it was voluntary. Well you had to pay. ... read 3 more