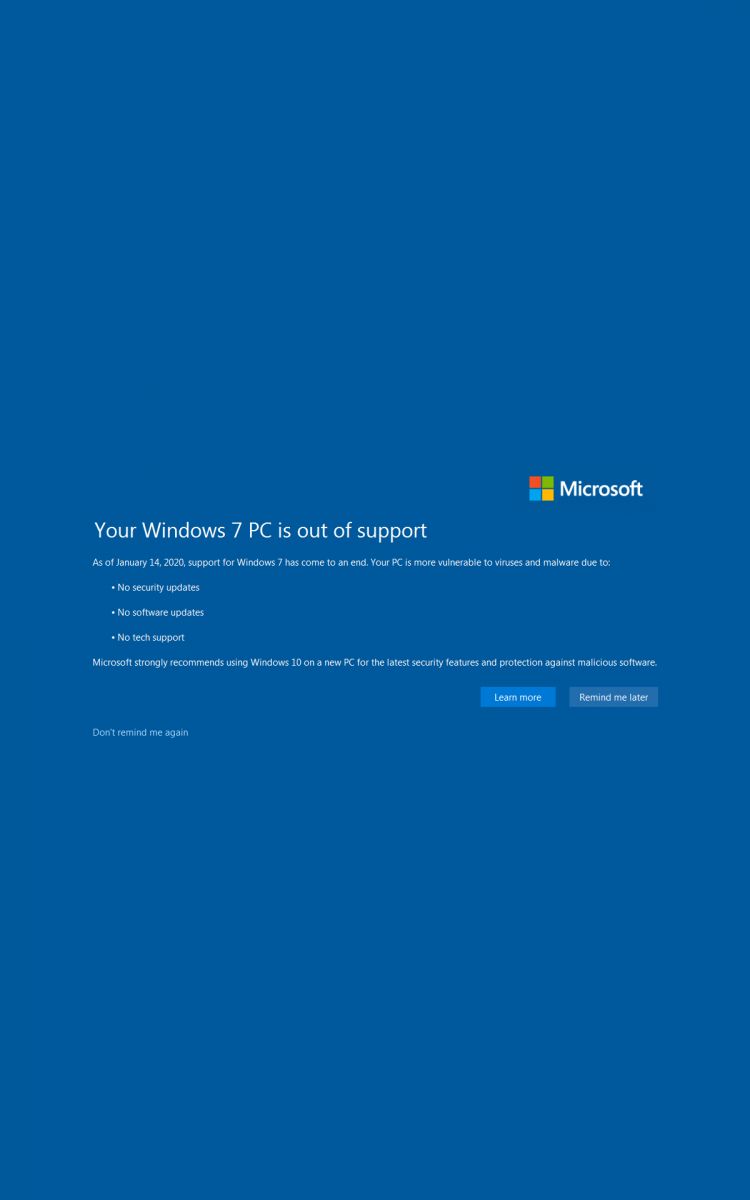 I am sad this morning because #Windows 7 told me I will no longer be getting updates, security patches or tech support. I will miss those tech #support guys that I used to call at Microsoft when I was lonely and wanted new features to enhance my quality of life. #rip

Support is one of those memes in technology which has been coming up more and more in the modern age of software as a service (SAAS) and security through never ending updates (STNES). In the old days you could only buy software when it was tested and completed. Nowadays to buy software with LTS. Few people attempt to explain what it actually means to have "no support". It is assumed that bad things will happen - malicious software will attack you from all angles. If you are using windows 7 you most likely see the quoted message below popup on your screen when you log in;

"As of January 14, 2020, support for windows 7 has come to an end. Your PC is more vulnerable to virus and malware due to:
* No Security updates
* No software updates
* No tech support

Microsoft strongly recommends using windows 10 on a new PC for the latest security features and protection against malicious software."

I will attempt to go over this message in fine detail and try to explain it to the best of my knowledge. Every user on your entire network of Windows 7 machines will have no doubt seen this message by now.

The January 14,2020 date means that you will stop getting those annoying requests to install updates to your computer. This does not mean that the updates will totally stop but consumers on the lowest level of the food chain can hope to get less and less of them and be able to turn on their PC without stress.

"You PC is more vulnerable to virus and malware"

This is one of the most over used meme. The fact is everything connected to the internet is vulnerable to virus and malware at all times, Wednesdays, Thursdays, everyday. It is no more or less with or without support. Everything is a in a state of waiting to be hacked or you yourself might install malicious software that deletes all your data.

Security updates protect you from known viruses. Most of the viruses are unknown which is why there are so many security updates. The severity of the virus, when, and where it will affect Windows is also unknown so with or without support a windows user is really hoping that Microsoft finds out about the virus before it hits their computer. It is essentially a catch-22 situation from which an individual cannot escape because of contradictory rules and limitations of time and space. You will get hacked.

I have been using windows 7 for several years and have NEVER seen a significant update to the base explorer that I could identify. It is as if the windows 7 explorer is frozen in time once you buy it. I am not even sure what "Quality of Life" updates mean because it certainly is not obvious. Facebook is hacking you through your friends.

Wait is there someone at Microsoft that you can call to fix your Windows when it segfaults? Ok. Well if you did have someone that number will be disconnected and the twitter account will nolonger stalk @you when mention #windows #problem.

The word strongly in there suggests that some kind of urgent action is required on the part of the user at this very moment.

So the strong recommendation requires that you use a new operating system called "windows 10" and on top of that you buy a "new PC". Imagine driving down a road in a car that suddenly flashes across the dashboard "We strongly recommend that you buy a new car!". This is hard to imagine because this does not happen with cars. Automobiles are highly regulated, very expensive and can be maintained in serveral ways without the need aid of the original manufacturer.

So "security updates" has been changed to "security features" in this section. And "malicious software" has been added instead of "malware". Most of this seems to point to you only getting new security features if you buy a new operating system. Protection seems arbiturary and does not specifiy what level of protection will be provided or the types of malicious software that you will be protected against. This seems to be just another ride on the never ending support cycle.

Few people in Technology talk about the fact that computers are a "use at your own risk" medium. Software is eating the world and enabling children in Africa to make water from air. Simply nothing that exists on a computer is guaranteed. They work; when they work, while they work, if they work and if not, then you are out of luck and you can go dead a bush somewhere with no compensation. The few users that get some form of compensation need to prove the scenario in a world of chaos are akin to lottery winners.

This is the nature of personal computers and computer hardware from the beginning of time. There are particular areas in computing which need a higher tolerance such as the medical and automotive industry but in recent time even those industries have been show to be prone to glitchs after two fatal Boeing plane crashes were to a result of cost cutting software upgrades and price justification by addons. All software/hardware is covered by an End-User-License-Agreement (EULA) which reduces the chance of liability in case you die as a result of using the devices.

This EULA allows consumer computers to operate at in a environment that is often less reliable and cheaper since they do not have to do rigorous testing and quality control as would be needed in the medical and automotive fields. Smartphone batteries can explode or RAM can sporadically crash in certain unexplained circumstances and you just have to live with it, reboot and restart. Park at your own risk.

So in this context of cheap hardware and "no guarantees" what is support? Or what specifically is "windows support"? There is no wikipedia page. If you go to the Support website you will see a gigantic search box with more that 41,400,000 results if you search for "windows". The first result from the search is a link back to the page with the big search box.

With all this being said there are many kinds of support. Support is this nebulous/catch-all phrase that has a hidden timeline attached to it. If you told a consumer before they bought a new PC/OS they would probably think twice. This is one of reasons these messages do not popup on smartphones - it is more profitable to spend money marketing totally new versions and dumping/recycling old phones into poorer markets. PCs are harder to dump so why bother?

It does not matter what version of windows you are running because you are not secure and the hardware is not secure and your passwords are weak sauce. That fancy new bluetooth mouse you bought is not working? You will get 100 new mice drivers in the next update or you will get none - no one is really sure. You buy hardware+software, you enjoy it for a couple years then you are forced to buy something new - this is the way.

The long and short of it is that While you could continue to use your PC running Windows 7, without continued software and security updates, it will be at greater risk for viruses, trolls and malware. Going forward, the best way for you to stay secure is on Windows 10 or 11 or an apple device. And the best way to experience Windows 10 is on a new PC (so you should throw your old windows phone into the trash). It is possible to install Windows 10 on your older device, it is not recommended.