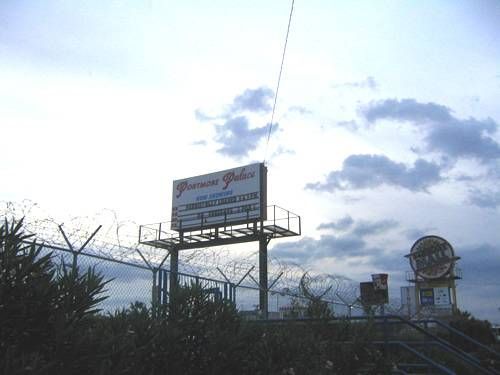 Well, the only movie theater in Portmore, St. Catherine Jamaica has closed until further notice.        I don't think its the cost (7 USD?) of the movie ticket. Much like the Baskin-Robbins that was across the street. The last movie I went there to see was Transporter 2 (which apparently nobody else watched). Before that it was The Matrix Reloaded and Revolution. Even further in the past Hannibal, MI2 and The Matrix. Most movies don't even deserve to be watched in the theatre but the theatre should be there just in case. What has happened to the movie watchers in Portmore? Nobody wants to travel all the way to Kingston to brave long lines and heavy traffic just to see a 2 hour movie in a crowded theater. A movie which by nowadays standards will suck 90 percent of the time. King Kong was very good by the way and Aeon Sucks could have been better. Miss Theron is always hot though.

I often wonder if the counterfeit dvd movie market has grown to such an extent that it has taken out a theater? Watching a movie at home could never compare to watching it at the theater a 30 foot screen with the sound turned up to maximum. Unless you have no neighbors or your own private theater. But people who live Portmore are of a different breed, anything is possible. Even the closing of the only theater that ever been in the Portmore will not unseat them even a little. Maybe by now everybody has a dvd player. But why would anybody need a dvd player when they have the best cable service in the world?

The reasons behind the closure are still out of my reach but the schedule has already been taken off the company website. I guess it is only a matter of time before the entire mall becomes one vacant lot, especially now that the new Highway 2000 project is nearing completion. With easy access to Kingston I suspect that only companies with strong niche markets will be able to operate efficiently in Portmore. Well I could blame the government, or probably it as a result of the radiation from the thousands of cellphones in the area.

Douglas Graham's Palace Amusement Company has closed its Portmore cinema, following a precipitous decline in revenue - that was more than twice the decline reported by the other cinemas in the group during the September quarter.
- Poor attendance forces closure of Palace's Portmore cinema

Well I guess that explains it all. Damn you!