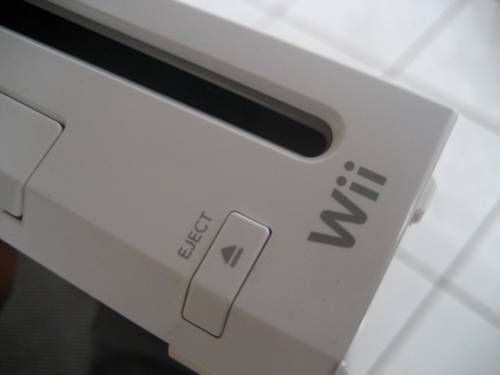 Originally it was called the "Nintendo Revolution" then close to launch Nintendo renamed it to just "Wii". Now when this name was announced I was like "wtf! are they crazy?". Well apparently if you build it - they will come and almost 2 years later the Wii is still selling like hot cakes. The console is self is pretty simple it has the motion controls used for playing games and it lacks the ability to play DVD movies.

Its white like a ipod. It seems that white is the new black. Technically the Wii is not a Playstation 3 or a Xbox 360. Nintendo went for the cheapest route possible which is probably why it costs $250 USD in and only has 512 mb of internal storage. Its very quiet and has a SD card slot on the front and 2 USB ports on the back - thats it. The controllers use bluetooth to communicate with the console and use AA batteries for power. Instead of building a whole new console from scratch Nintendo used an upgraded version of their previous console (the Gamecube) which makes it 100% compatible with the games and controllers released between the year 2000 and 2006 - which is always a good thing. The Wii also has built in Wifi which you can use to surf the internet on you television or download games from the Nintendo "Virtual Console" Service ( referred to as the VC).

On the software side good games are few and far between. The Wii is a patient man's console. There are alot of games available but you will have to wait 3 or 4 months for the AAA titles to be release. AAA titles are usually well polished and include the usual Mario, Zelda, Metroid first party Nintendo titles and a select few good third party releases. On the other hand the Wii comes with Wii Sports which include 5 mini games. Most people will play these games forever. The VC is the third option for getting games - basically every monday morning Nintendo releases approximately 3 (Nintendo, Super Nintendo, Nintendo 64, Sega Genesis, Graphix 16, etc) games. The games are priced between $5 and $10 USD. The games are downloaded the Wii's internal memory and can be played at anytime and are exact ports which does have a certain nostalgic factor to them - so if you had a NES back when you were young then you can get those same games again without the blowing. So far I've bought Sonic The Hedgehog, Super Mario Bros and Streets of Rage 2.

The Wii in essence is a bridge between a VCR and dvd player. Its cheap, unique and has enough "wow" factor for it to standout from the crowd on its own. Its an experience that cannot be found anywhere else, a big gamble which Nintendo surprisingly won. Right now the Wii is in the same position the Playstation 2 was 5 years ago - extremely popular with tons of lackluster/quick to the press video games. Not a bad position, eventually the games came but sometimes I wish it was just a little bit faster.