random pictures, taken by people with little stories attached. submit your own photo

Falmouth, on the North Coast of Jamaica, Between Montego Bay and Ocho Rios. 23 miles east of montego Bay airport or 35 minute drive.
Starfish trelawny is located on a long strtch of white sand beach, nestled against luch green mountains and turquoise Carribean Sea. This well established all - inclusive resort is ideal for families seeking comfortable, well-equiped accommodations with a wide range of amenities. Adults and children alike can take advantage of the many activites during the day and nightly evening entertainment. Sports entusiasts enjoy a wide varity of both land and water sports

They gave everybody a fact sheet with much more information that I could possibly ever type in one siting. Probably I should have asked her to email me a soft copy.
Wasn't the best resort but hey they have a water slide. You know your at a crappy resort when the sliding doors don't work. But I wasn't about to let that get me down. There was much fun to be had outside with the foreign women and white girls. Or so I thought until I got to the arcade with a rum and coke in hand - to my surprise you had to pay for all the arcade games. Which in fact were like three years old (but that's not the point). The point is that in an all inclusive hotel where you can drink as much liquor and soda as you want. But you have to pay for video games! What is the world coming to?
There was the beach, 3 jacuzzis, all you can eat cafeteria and pool tables in the pool. Which I kept referring to as "water-poolo". Water slides plus an all you can drink bar filled with cheap vodka and more bottles than you can count but I wouldn't know the difference between cheap vodka and sprite. There was a bar in the hotel lobby, in the pool and by the water slide. Plus in case you've escaped to your room, there behind a clear glass shelf are 4 bottles, inverted and connected to a dispenser.

The whole arcade thing didn't get me down though, I could always play video games when I got home (chad?) but what urked me the most was the fact that you had to pay for every other activity that didn't involve eating, drinking, the pool or the self motivated sports (such as basketball ball, synthetic ice hocket, water-poolo, pool volley ball or mini golf) which weren't my cup a tea or glass of vodka in my case.

All is not lost, thought the key to the jet ski was. Yes it's totally my fault but the guide said that he'd come back he next day and look for it - as impossible as it may seem. I drank so much salt water so I don't even know where I lost it, but he'll find it, he's the expert. Luckily we were leaving that day and I didn't get to pay for any damages because I KNOW HES NOT GOING TO FIND IT unless he has a metal detector or a diving team. But alls well that ends with you still being alive and not in pain. More pictures in the jamaica photo project. 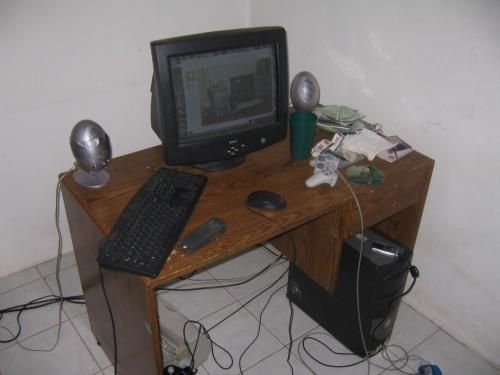 I had a compaq PC previously but the processor got fried when I tried to over-clock it - that's all I'm going to say about that. Now I do all my php on my dell optiplex (call me a sellout if you want) which is about 2 yrs old.
The crappy silver speakers aren't mine, the one I had before exploded if you play them too load which my nephew often does (he likes the noise). Yes that is duck tape, music makes the whole go round. The machine is a 1.6 mhz Dell with 256mb of RAM. There is a 16mb ATI graphic card in there (yes it sucks but I have a GameCube). 17 inch monitor, 1290 by 1024 pixels because there are 174 files on my desktop 58 of which are called New Text document(n).txt. The playstation controller and my cell phone is connected through the USB port. The printer is borrowed because I don't need to print anything - hardcopy? What is hardcopy? Paper pollutes the environment so do CRT moniters.
The Cds are all blank except the green one which is AOL 9.0 optimized which I can't use in jamaica but comes with the full version internet explorer 6 point something. There is a 3 and a half inch diskette there as well - diskettes are cool. I don't have a burner because I don't know if I could resist the temptation.
And yes the keyboard is pretty dusty I know. Dust is my friend. I could have built a PC if I wanted to, yes it would have been cheaper but I a software guy - leave me a lone. I'm gonna buy a 12 inch apple lap top - eventually. OSX kicks but.

shade commented: hey i have the same problem of numerous new text dosuments on my desktop too. renaming is for suckers. AOL and IE on one cd together. that sounds like a cd i'd love to break into lots of little pieces. and it's *duct* tape, not duck tape. plastic tape for use on ducts and piping - not for use on ducks, heheh. ... read 4 more 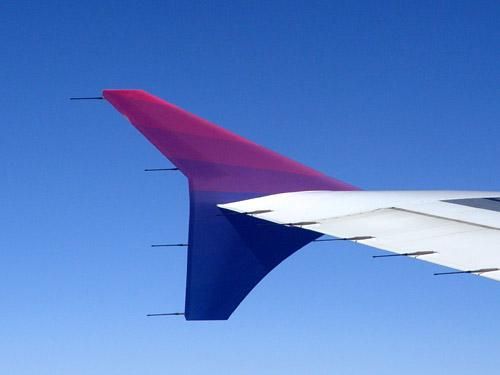 Wing Tip of Air Jamaica A320 aircraft.
This flight was enroute from KIN/MBJ to JFK.

Notice the Static wicks at on the end of the Tip.

Well u may ask what is a Static Wick?

A static wick is a piece of metal connected electrically to the frame of the aircraft, with one or two spikes or needles on the end. It is housed in a fiberglass rod to insulate it from the airplane. Because the spikes concentrate the electric charge around them, and they are connected to the airframe, they allow the airplane to dissipate any static electricity it may build up out into the air. Also - if lightning DOES strike the plane, the chances are that the electricity will go through the dissipator and not through the airplane.

Bwoy ya'd people this winter did tuff iah. This is a shot taken the day after bout 12 inches of snow fell in NJ round December 2003.

Road kine a clear still; snow plow come thru and did the best it can to clear the streets. 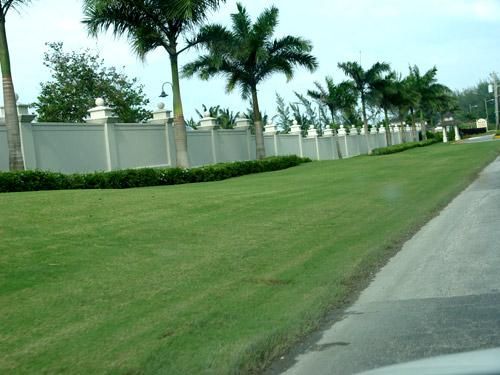