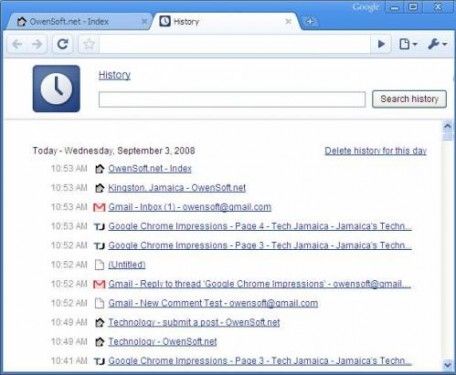 The fonts isn't at good looking as safari ( can't figure out whether the engine is khtml or mozilla ).

It stole everything that is good about safari and opera.

The simplicity of it is astonishing. No Plugins, no settings, no toolbars, no need for a searchbox, dynamic status bar (hover over a link and it appears), nice searchable history page (its almost like a webpage as opposed to app controls).

Chrome + google may take over the world. Google has the internet by the round things.

Tami commented: Better than Firefox? I think the new Mozilla is a waste of Porgrammer time. It isnt at all enticing but i cant seem to get back my FF. Gonna try out chrome and see where it takes me. ... read 4 more

Burns my soul. There tends to be too much stuff on the left and nothing on the right. Lots of clutter on the news feed.

Weird Lines around everything. 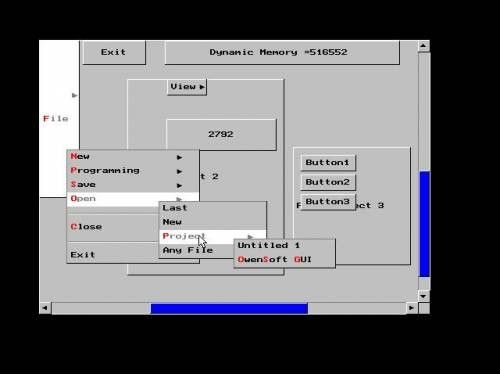 (old geeky stuff. ignore. I'm fixing up my projects page) Here are the links to my latest version of my GUI (GRAPHICAL USER INTERFACE). It includes some old and new versions, just to display where the program is coming from - how the program has evolved and mostly because I change so much of the good stuff, in my program, each time I update it:

Make sure you post a comment below before you leave. The definitions of the objects and the tpu files are available if you'd like to take a look at then, I don't really develope for the GUI alot currently but I do take some time and keep it uptodate every now and then by fixing bugs and adding new controls.
I have provided my minesweeper game object which you can try to inplement into your own programs(incomplete). If you have a object/control which I can incorporate in to my interface (such as a textbox control), I will gladly take a look at it because the GUI is build with programers in mind. The only external object added so far is the scrollbar object which was ported from a totally different GUI by Lennoi Anderson(who all so provided the mouse and screen units).

It was written this way to solve one problem that I have noticed whenever writing various types of programs. I won't tell ou what that is right now but it results in many changes at the low level of the program.

written in Tp7, provided by owen, although no problems should occur I must insist - use/download software at your own risk.

-you can tab/shift throught most of the objects.
-full keyboard support on menu and other objects (I started building it in MSDOS and I didn't have access to a mouse most of the time so I had to build in very good keyboard support).
-objects currently include: dynamic menus (generated from a string variable), normal and adv buttons, frames (which you can tab through), collection object, linklist object, object-binder object, timer object, titlebar, clock, minesweeper app, scrollbar.
-all objects can be dragged, mouseover, mousedown, mouseup, mouseout and gotfocus/lost focus, and added to collections (menus, frames, lists, etc).
-all objects have two draw plains (which is how I can draw the menus without having them over written).

-you can't add a frame to a frame (will you can if you want to) this will result in the tab marker being trapped in the deepest frame (collection). Yeap you can tab down to it but you won't be able to leave unless you use the mouse. this bug is my main priority.

how can you help

-if you have any "windows like" controls or would like to write a program using the GUI email me!
- I also need a textbox control - like the one in windows

Copyright (C) 2002 owen. All rights reserved. THIS CODE AND INFORMATION IS PROVIDED "AS IS" WITHOUT WARRANTY OF ANY KIND, EITHER EXPRESSED OR IMPLIED, INCLUDING BUT NOT LIMITED TO THE IMPLIED WARRANTIES OF MERCHANTIBILITY AND/OR FITNESS FOR A PARTICULAR PURPOSE. 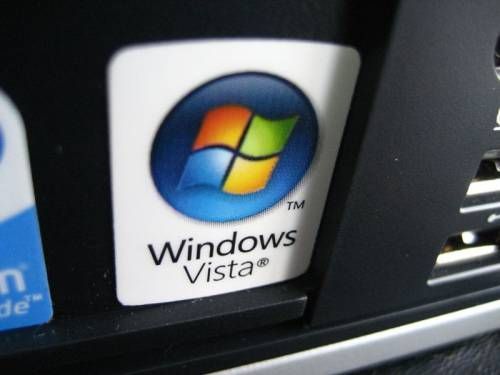 How can you be building something for 5 years, have all the money in the whole-wide-world and mess it up? I told them to re-write everything from scratch, now that I look back, that was not such a good idea THEN!! But now - I don't know.

I (on the other hand) am still rocking MY LEGAL COPY OF WINDOWS 2000 and I'll like to tell Microsoft to stop trying to kill a perfectly good operating system - I'm watching you. I am not buying another operating system unless its at least GOOD or better than MacOSX. It runs fine on my 1.6 ghz Dell machine that I bought 4 years ago for 1300USD. I'm not going to buy a new machine just to surf the net. I have a wii, a dreamcast, a playstation, my neighbour has a PS3, and another neighbour has a 360 - PC GAMING IS DEAD - except for GTA 4 and FPSs. My pc wieghs like 20 pounds but I like it, its black and runs quite fine on 256 mb of ram - I bought a 19" flat panel for it just the other day - pimp my pc.

Whats wrong with software nowadays? Why you gotta be all up in my RAM? I remember the days when a user interface was simply colored characters on the screen - now - I think everything is running the UNREAL ENGINE 3. It hurts my heart to realise that no matter how much RAM or how fast the processor you put into windows you still have to wait on stuff to happen. The new moto should be "its thinking".

I have this HD version of the Matix 2 trailer on my machine from just before the movie came out, which is basically 1000-something by 700-something. I remember specifically the point where Trinity would jump through the window into a free fall and my quicktime player would drop frames like a mother. Fast forward 2 years later I installed the new version of the Quicktime player - same machine - same ram - same everything - plays SMOOTH AS BUTTER. See? An improvement not just in features but "efficiency". 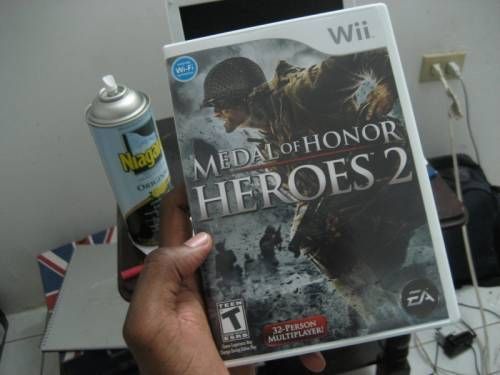 Now the thing about this game is that its ugly even for a wii game with sparce environments that open and close as you trigger events. I should have suspected as much when its a game made for the PSP. You can play 32 player online death match but you'll die faster than you can kill the other person. Also you have the single player which I set to the hardest level because I had a feeling that the game wasn't going to be much of a challenge on normal ( and Ineed to get my monies worth ).
Its a nice FPS (look it up), the wii controller does well, if even better than a mouse and a keyboard. IT has a learning curve but by half-way through the game you'll be straffing and shooting multiple guys in the head. The AI is however pretty stupid or should I say boring and will often:

However I'm still playing it, if only to say I had played it. I should have bought Metroid Prime 3 instead

I give it a 6/10 only because you can shoot people with a gun. Awful game, awful AI. If you can: rent it first or buy my copy.